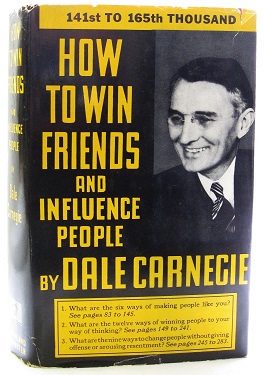 This book was published in 1936, before WW-II. It’s impressive how contemporary it still sounds! It’s an easy and entertaining read, and certainly a good list to have in mind.

Come from a place of love, make the effort to be nice, behave around people with empathy, i.e. understanding their point of view and motivations, and they will listen to what you suggest.

How to win people to your way of thinking

Childish? Perhaps. But that is what they said to Napoleon when he created the Legion of Honour and distributed 15,000 crosses to his soldiers and made eighteen of his generals ‘Marshals of France’ and called his troops the ‘Grand Army.’ Napoleon was criticised for giving ‘toys’ to war-hardened veterans, and Napoleon replied, ‘Men are ruled by toys.’

~ Carnegie, Dale. How To Win Friends And Influence People